Showing posts from October, 2017
Show All

Tracing the ownership of land can be extremely difficult. Over time land often exchanged hands many times. Tracking the ownership of a townland can be a frustrating task due to gaps in the records. And yet it can be a rewarding task because it can often open up new pathways of investigation for the local historian and genealogist. This was a task I tried to undertake when researching a family by the name of Fenton who resided in the townland of Urney in Urney parish, county Tyrone from the mid-seventeenth century. The Fenton family of Urney can be traced back to a Manasseh Fenton who can be found in the 1660 poll book, 1664 hearth returns and 1668 subsidy rolls for the parish. At some point in the history of the family they came into possession of an estate of four townlands in the parish of Cappagh in Co Tyrone but were absentee landlords as they continued to live in the parish of Urney until 1814. 1660 Poll Tax Urney - Manus Finston (sic) The Fenton family used the graveyard
Post a Comment
Read more

The 1841 census of Ireland Described as a 'mile-stone' in census taking the 1841 census of Ireland broke new ground in the range of information collected and in the presentation of the results. The General Report of the First Census of the Free State in 1926 commented 'the remarkable census of 1841 merits particular attention because of its intrinsic excellence'. Three commissioners were appointed to oversee the census 1. William Tighe Hamilton, a young lawyer from the Chief Secretary's Office. 2. Henry Brownrigg, a former army officer and Inspector of the RIC. 3. Thomas Larcom recruited from the Ordnance Survey Office. It was Larcom who was the chief architect of the 1841 census having gained a wealth of experience in social enquiry while working for the OS survey of Ireland. The enumerators were members of the RIC and DMP supplemented by other government officials. FORM A was distributed to each household to complete prior to census day for the 'hea
Post a Comment
Read more 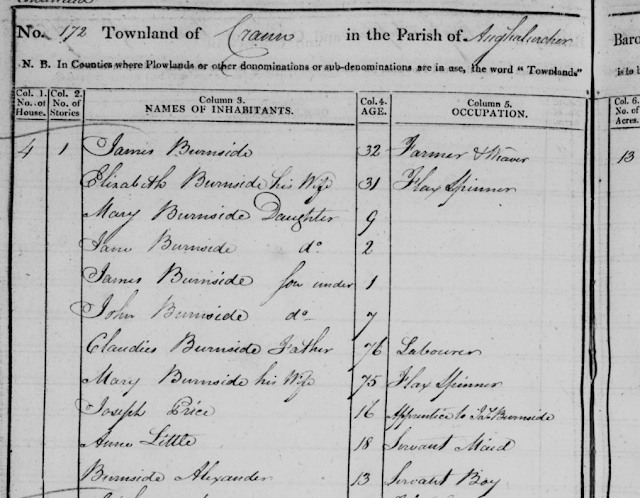 If I had a wish list of materials or manuscripts that could have been saved from the destructive explosion and fire in the PRO in 1922 the 1821 census would be high on the list. In fact, it might actually make the top of the list. The reason for this is that this census named every man, woman and child in Ireland two decades before the Famine (the 1831 census named only the head of household). It also names many people born in the eighteenth century. The 1841 and 1851 census returns also perished in the PRO at the same time (those for 1861-1871 were destroyed shortly after they were taken and those for 1881-1891 were pulped during the First World War as there was a paper shortage). http://www.ulstergenealogyandlocalhistoryblog.com/2017/07/1831-census-abstracts-co-lderry.html William Saw Mason was charged with the task of administering the 1821 census.  The enumerators employed were mostly tax collectors by profession. In an effort to overcome the populations hostility contact w
Post a Comment
Read more

Crossle, Groves, Betham & Thrift might sound like the names of the midfield for an English football team or even the names of the singers in a super group but in reality they are individuals who have left a tremendous legacy in Irish genealogy through their hard work and dedication.  Much of the work of these genealogists is dispersed between a variety of archives in Ireland including the National Archives and Genealogical Office in Dublin and the Public Record Office in Belfast. GROVES In an earlier post I looked at the life of Tenison Groves and his work.  http://www.ulstergenealogyandlocalhistoryblog.com/2017/09/tenison-groves-record-agent.html Archibald Campbell will, Camus, 1623 Tenison Groves Ms BETHAM Sir William Betham was appointed Ulster King of Arms in 1807 and set about creating abstracts of pre-1800 wills. He also reconstructed family trees and pedigrees. His collection holds nearly 490,000 records. It includes abstracts of wills, reconstructed family trees
Post a Comment
Read more 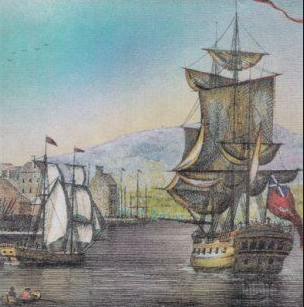 1718 migration to New England Next year will see the tercentenary of the famous migration of Scots and Irish born Presbyterian people who left the north of Ireland on their way to a new life in the New England colonies in north America. The majority of Scots-Irish migrants who left North-West Ulster hailed from two particular districts - the Bann valley area north of Garvagh and Kilrea, which included the parishes of Aghadowey, Macosquin, Dunboe and Ballywillan. A second group came from the Foyle valley area including the Laggan area of Co Donegal. Of course, migration was not restricted to these areas as migrants left from other parishes in Londonderry as well as the area north of Strabane in Co Tyrone. http://www.1718migration.org.uk/ Many years ago in Conolly archives in PRONI  I uncovered an interesting list of emigrants who were leaving the Roe Valley for America in the year 1718.  The Conolly Archives in PRONI are substantial but somewhat haphazard in their contents
Post a Comment
Read more

1803 Agricultural census of Co's Antrim & Down

1803 Agricultural census Ballylucas townland, Co Down THE AGRICULTURAL CENSUS OF 1803 The threat of an invasion of Great Britain and Ireland by Napoleonic France recurred periodically during the late 1790s and the early years of the nineteenth century. The government in London made plans in 1797 and 1798 to abandon coastal areas and introduced new legislation for the defence of the realm. This legislation required the lord lieutenant for each county to make returns, especially from maritime parishes, enumerating livestock (farm animals) and the wagons and horses available for transport, and giving the quantity of dead stock (crops stored). There are extant returns for some southern counties in England. During a scare in 1803 about an invasion of Ireland, resulting from the planned but abortive insurrection of that year, similar returns were made under the same legislation, which, after the Act of Union, applied to Ireland. The surviving returns relate to many parishes in Coun
Post a Comment
Read more 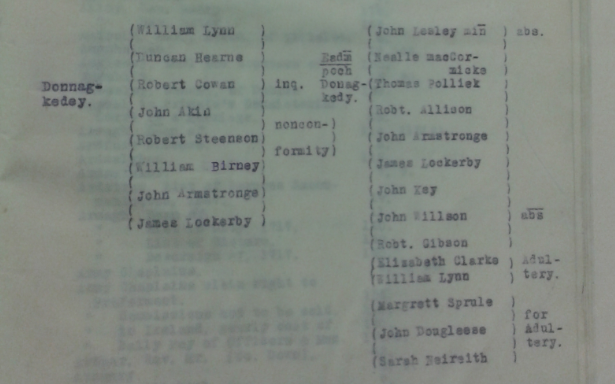 EX-COMMUNICATIONS DIOICESE OF DERRY 1667 PRONI T/552. In 1667 over one hundred people in Derry diocese were excommunicated by the Established Church, mostly for nonconformity. Nonconformity was defined as ‘not only absence from church, but baptising by unlicensed ministers’. A number of individuals were excommunicated for refusing to contribute to the repair of their local Church of Ireland church or 'refusing to hear Divine Service'.  Other reasons included failing to pay tithes, fornication and adultery. John Boyd of Ardstraw, was further charged with ploughing on Christmas Day and condemning the ecclesiastical government. In the parish of Donagheady (below) the most common reasons given for expulsion was non-conformity, absence from Church and adultery. Three couples were indicted for adultery, named and shamed without due process by modern standards. The parishes include: Ardstra Balteagh Bodoney Cappagh Clondermott Clonleigh Cumber Donagheady Donaghmore Drum
Post a Comment
Read more

Subsidy Rolls list the nobility, clergy and laity who paid a grant in aid to the crown. The rolls list the persons of means in the community who were subject to the payment of subsidies, which then formed the government's main method of direct taxation. Details are given of the name of each person, where they lived (usually a townland) and the amount of subsidy that they paid. The amount of the subsidy was based on the valuation of either the person's land or goods. Because they include only the wealthier members of society, they are less useful than hearth money rolls. Nevertheless, the hearth rolls are incomplete in many areas and the subsidy rolls do provide a useful substitute in those parishes that are deficient. SUBSIDY ROLLS PRONI Antrim 1666 T/808/14889  Cavan 1662 T/808/15142  Donegal 1662 T/808/14998 Donegal 1669 T/808/15003  Down 1663 T/307A  Fermanagh 1662 T/808/15068 (Enniskillen town only)  Londonderry 1662 D/4164/A/14; T/716/4, 15; T/15
Post a Comment
Read more
More posts