Showing posts from February, 2020
Show All

Headstones can tell a tale 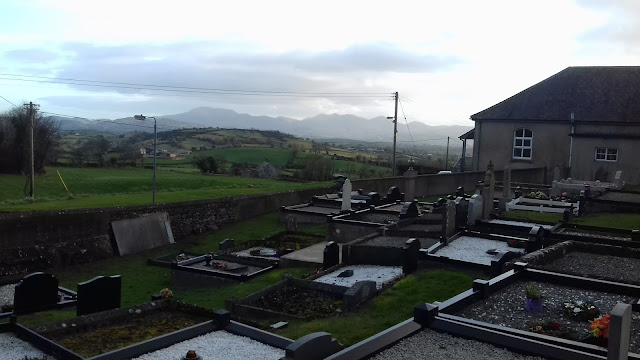 It may be considered by some to be a morbid pastime but I love visiting older graveyards that can instantaneously transport us into the past and reveal generations of forebears that resided in a particular district. In Ulster, each region has its distinctive surnames. Sometimes graveyards can be located in beautiful surrounds such as the graveyard attached to Drumgooland Presbyterian Church in Co Down at the foot of the Mourne mountains (below). DRUMGOOLAND PRESBYTERIAN GRAVEYARD I was struck by one headstone in Drumgooland erected by Hugh Stuart to the memory of his four beloved children in the Famine year of 1847. ERECTED BY HUGH STUART IN MEMORY OF HIS CHILDREN A number of headstones had fallen and were placed against the graveyard wall. A number were broken. ERECTED BY HUGH PORTER OF MONEYSLANE (BROKEN) Such memories of a by-gone age need to be preserved for posterity and thankfully transcriptions now exist for the majority of older graveyards in Ulster undertaken
Post a Comment
Read more 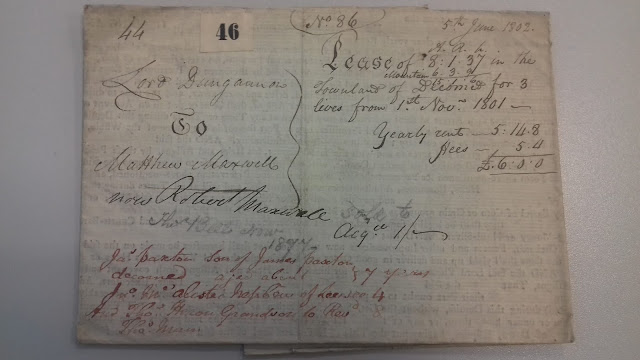 Sometimes in the course of researching a particular family one uncovers interesting information on neighbours. Of course local history and genealogy are linked - as I have mentioned before one of my key research strategies is to search by place to focus on townland/parish and seek out the sources pertaining to the area that reveals the surnames. Such was the case when researching the family of Maxwell in the parishes of Garvaghy and Drumgooland in County Down. Matthew Maxwell (c1776-1859) of Ballooly also held farms in Cloughskelt and Dechomet. The latter farms were held by lease under Lord Dungannon. A search of Lord Dungannon's estate records in PRONI uncovered an early lease dated 5 June 1803 for a small farm in Decomed containing 8 acres plantation measure. This was a perpetuity lease (or a three-lives lease) a valuable lease that would later pass from Matthew Maxwell to Robert Maxwell.  What caught my attention were the different lives given in the lease as follows -
Post a Comment
Read more
More posts