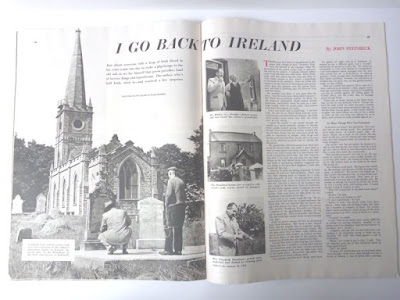 In August 1952 Steinbeck visited Ballykelly to trace his family roots with his wife Elaine. Steinbeck wrote about the trip in Collier’s magazine the following year in an article entitled, 'I go back to Ireland'.

COLLIER’S MAGAZINE 1953
(In the 1920's one) of my uncles made the trip (Joseph Hamilton of Chicago). He reported that he had wept out of pure sentiment the whole time. He also reported that the family was just about played out; there remained two sisters and a brother—Katherine, Elizabeth and Thomas —children of my grandfather's brother, all old and all unmarried. They lived in the "new house" (the old house had burned down several hundred years ago). After my uncle's return, we had an occasional letter from Elizabeth. She wrote a thin, elegant hand, and her English had an exquisite quality, reminiscent of the eighteenth-century writers. We felt good about that; we didn't really believe any dull or illiterate Irish existed—in Ireland, at least.

We were looking for a place called Mulkeraugh. You can spell it half a dozen ways and it isn't on any map. I knew from half-memory that it was near to Ballykelly, which is near to Limavady, and I knew that from Mulkeraugh you could look across the lough to the hills of Donegal.

We clattered and smoked along 18 miles from Londonderry, past thatched cottages and hedged little fields where the black bundles of the flax lay waiting to be taken in. The countryside was rolling and lovely and the blackness of the city went out of us. The Donegal hills were remote and sunny across the broad water of the lough. We drove right through Ballykelly without knowing it was there, but at Limavady they turned us back. I guess I had thought of Ballykelly as a town; it isn't—it's what they call in Texas a wide place in the road. Except for two churches, it wasn't different from the cottage-lined highway we had been driving on. An old man stood in front of one of the churches. "Mulkeraugh?" he said. "Second turning to the left—a quarter of a mile." "Do you know any Hamiltons there?" I asked. "They're all dead," he said. "Miss Elizabeth died two years ago. You'll find Mr. Richey, her cousin, on the Hill, though."

Mulkeraugh isn't a place at all. It's a hill and three or four farms near about.

Everyone knew the three children of my grandfather's brother (William). Miss Katherine. Miss Elizabeth and Mr Tom. It was a good farm they had—about 200 acres—and a good house of two stories. These children never married, the two sisters and the brother.

EAST OF EDEN
Steinbeck's famous novel East of Eden was published in the same year as his visit to Ballykelly. In Chapter 2 of 'East of Eden', John Steinbeck writes: "Young Samuel Hamilton came from the north of Ireland and so did his wife. He was the son of small farmers, neither rich nor poor, who had lived on one landhold and in one stone house for many hundreds of years. The Hamiltons managed to be remarkably well educated and well read; and, as is so often true in that green country, they were connected and related to very great people and very small people, so that one cousin might be a baronet and another cousin a beggar. "And of course they were descended from the ancient kings of Ireland, as every Irish man is."

THE END OF AN ERA:
The Hamilton connection with Mulkeeragh had ended with the death of Mary Elizabeth (Minnie) Hamilton, aged 84, on February 11, 1950 (Minnie was the daughter of Samuel Hamilton's brother, William John Hamilton and Jane Ritchie).