August 27, 2017
On June 30th, 1922, the biggest explosion seen in Dublin before or since took place at the Four Courts. Mines exploded in the basement of the Public Record Office, which was at the western end of the Four Courts complex, and the records of the Irish administration from the 13th to the 19th century were almost totally destroyed. Anti-treaty forces had occupied the Four Courts complex in April 1922, and had made the Public Record Office their munitions block, where they stored mines and ammunition.
Ernie O’Malley, IRA director of organisation, a member of the Four Courts garrison, and later a talented author, wrote of the event in The Singing Flame: “A thick black cloud floated up about the buildings and drifted away slowly. Fluttering up and down against the black mass were leaves of white paper; they looked like hovering white birds.” 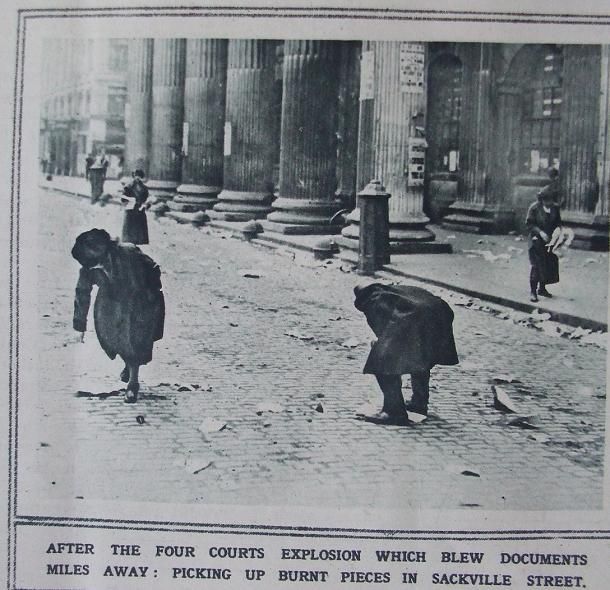 We have an almost complete account of what was in the Public Record Office before its destruction: Herbert Wood, assistant deputy keeper at the record office, published his guide to the records deposited in the Public Record Office of Ireland in 1919. It makes sad reading today!
http://www.nationalarchives.ie/wp-content/uploads/2014/06/Herbert-Woods-Guide-to-Public-Records.pdf