Sir Robert McClelland of Bombie (Kirkcudbright) in Scotland was a key player in the plantation of the new county of Londonderry primarily in the north of the county between Limavady and Coleraine within the baronies of Keenaght and Coleraine. In the early seventeenth century he became the landlord of a two large estates that he leased from the Haberdashers' and Clothworkers' companies of London.

McClelland attracted many Scots from his own lands in Kirkcudbright to his estates in Ulster. His estate became a bridgehead for immigration from Scotland into the north of the county primarily through the port of Coleraine. As a result there is also documentation in Scotland concerning McClelland's estates in Ulster in the early seventeenth century (primarily through the papers of his son-in-law Sir Robert Maxwell who inherited part of the Haberdashers' estate). 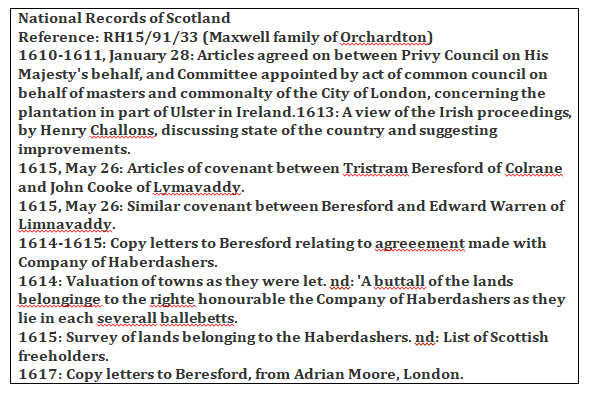 NAS RH15/91/33 page 27 Description of the barony of Keenaght (c1610) (Haberdashers' lands)
Scottish handwriting:
Several things are worth noting: the letter c used by the writer is a secretary hand c. Written correctly this has a lead in stroke from the bottom left, a down stroke, a cross stroke and a diagonal stroke ending above the right side of the letter. The c in the word corne in line 2 is a good example. Sometimes, if the diagonal stroke ends heavily, it can look like a dot (for example in the word especially – the first word in line 3).

Transcription (of above document)
These p[ro]porc[i]ons Containe 56 Balleboes, much of it very
good ground as well For corne as meddowe & pasture
especially those part[is] which lie the nexte the Riv[e]r of Roo.
And For such therof as lieth vpon the mountaines, it is good
For grassinge and large Townes.
The whole p[ro]portion accordinge to the circuite therof
many containe about 12000 Irishe Acres all wast[is]
included, Butt of meere waste in this proportion
ys verie little For the g[rea]t[e]st mountaynes are indifferent
Feedinge.
In this proportion is noe woode att all, butt such as
must be used For building[is] (wattels excepted)
must be had by boate From Colrayne into the riv[e]r of Roe
about which is the chiefest places For buildinge
In this accounte the Church & freehold is included

Ardekille or Artikelly mentioned above was the townland where Abraham Hillhouse (c1610-1676) had settled by 1639 (see previous post linked below).

My interest in the documentation on the Ulster Plantation from the Scottish archives was aroused by a most brilliant scholarly study of the period in M Perceval Maxwell's opus 'Scottish migration to Ulster in the Reign of James I' (UHF, 1990). I cannot recommend this book enough for anyone interested in migration studies or the plantation of Ulster. It is a classic. 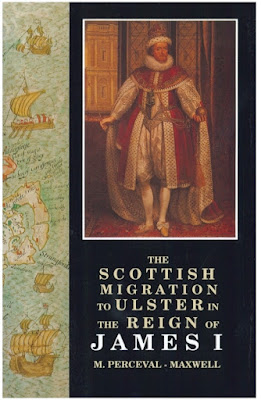