The RCB and Church of Ireland registers - what has survived?

February 13, 2018
The REPRESENTATIVE CHURCH BODY LIBRARY exists to provide a repository in which the archives and manuscripts of the Church of Ireland can be stored, arranged and made available to researchers in a systematic fashion.

The RCB has produced a searchable PDF file containing information on the registers for every parish in Ireland including those destroyed in the fire in the PRO in 1922. The PDF file is a most useful tool in searching out the history of the registers for Church of Ireland parishes. 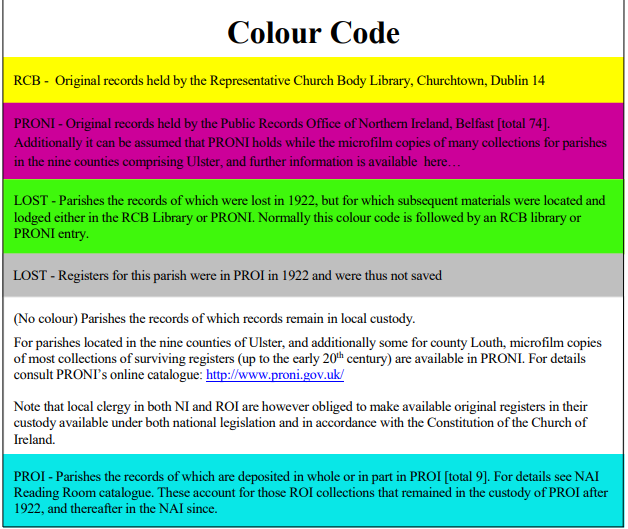 The List of Church of Ireland Parish Registers was originally compiled in-house for the Public Record Office of Ireland (PROI), now the National Archives of Ireland (NAI), by Miss Margaret Griffith (1911-2001) Deputy Keeper of the PROI during the 1950s. Griffith’s original list (which was titled the Table of Parochial Records and Copies) was based on inventories returned by the parochial officers about the year 1875/6, and thereafter corrected in the light of subsequent events - most particularly the tragic destruction of the PROI in 1922 when over 500 collections were destroyed.

A table showing the position before 1922 had been published in July 1891 as an appendix to the 23rd Report of the Deputy Keeper of the Public Records Office of Ireland. In the light of the 1922 fire, the list changed dramatically – the large numbers of collections underlined indicated that they had been destroyed by fire in 1922. The List has been updated regularly since 1984, when PROI agreed that the RCB Library should be the place of deposit for Church of Ireland registers.

Under the tenure of Dr Raymond Refaussé, the Church’s first professional archivist, the work of gathering in registers and other local records from local custody was carried out in earnest and today the RCB Library’s parish collections number over 1100. The Library is also responsible for the care of registers that remain in local custody, although until they are transferred it is difficult to ascertain exactly what dates are covered. Where register collections remain in local custody it may be assumed that they carry on after the cover dates given in the List. Efforts continue to encourage local clergy and parishes to transfer non-current registers into the permanent custody of the Library. In the light of registers being transferred and new knowledge of copies and transcripts being obtained, further extensive amendment to the List was carried out by NAI, most notably by Ms Aideen Ireland, Senior Archivist.

In a project devised and undertaken by Dr Susan Hood during 2014, the List was again extensively updated, and furthermore colour-coded and made available online for the first time through the Church of Ireland website. The colour-coded version of the List was subsequently updated in July 2015 to account for original registers for parishes in Northern Ireland held by the Public Records Office of Northern Ireland in Belfast. Re-launched on the 3 August 2016, the List of Church of Ireland Parish Registers was definitively updated and reformatted with the inclusion of live links to online parish register sources by Claire Santry FIGRS as an 80th Anniversary Project of the Irish Genealogical Research Society: Ireland’s oldest genealogical society. This painstaking effort should significantly assist researchers providing them with an online search tool that links easily to online information. The list will continue to be maintained and updated on a regular basis as more registers are transferred to the RCB Library and in anticipation of further transcribing, indexing and ultimately digitization of records.