December 29, 2018
Derry in the late nineteenth century was a fast expanding urban-centre (with a population of some 30,000 in 1871). Streets were orderly and there was an effective sewage system as a result of a city Improvement Act in 1848. The city also had a jail (with 170 cells), a workhouse, two dispensaries and a lunatic asylum, in effect, the beginnings of an embryonic regional welfare system.


Derry was a hub of the regional transport system. Several railway companies competed for the passenger trade – Irish North-West Railway; Belfast and Northern counties railway and the Londonderry & Lough Swilly railway company. One could send a parcel to any part of the world through Globe Parcel express a service provide by Edward Gillespie on Foyle Street. One could catch a steamer to Glasgow every day of the week except Sunday and there was a twice weekly service to Liverpool and also to America. The old wooden bridge (that had been assembled in America and brought to Derry in 1790) had been destroyed by an iceberg in 1862 and the new Carlisle Bridge was constructed in 1863 at the cost of £100,000 some 1200 feet in length capable of carrying railway and ordinary road traffic. Some of the cost would be offset by the tolls levied for crossing in either direction. 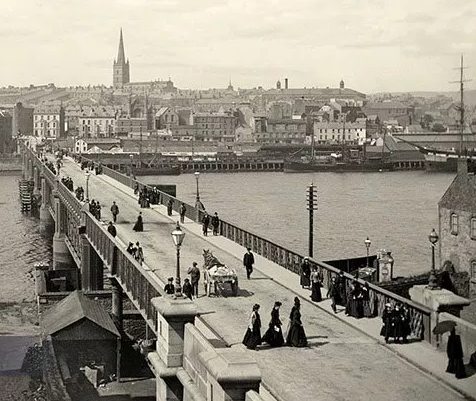 There was a general increase in prosperity in the city and the numbers of shops increased dramatically.  In addition the growing number of factories attracted an influx of rural migrants, especially the shirt-industry for which Derry would become famous. In 1871 the city was lit up by gas and there was an active social scene as there were 288 licensed pubs in Derry and probably many unlicensed shebeens. A Hackney car service was available night and day – to travel one mile cost one shilling, so was quite an expensive taxi service for the average person. The town would have been extra busy on the fair days held on the first Wednesday of each month, and principal market days were weekly on Wednesday and Saturday. Regular market days for perishable food products were of course held daily. City petty sessions courts sat every Thursday at 11am to deal with minor charges. The principal cause of disorder was drunkenness and the usual fine for being drunk on the public street was 1 shilling, which led to a call for greater restrictions on licensing laws and even the demand for prohibition.