It is locates south-west of Omagh on the main road to Irvinestown: 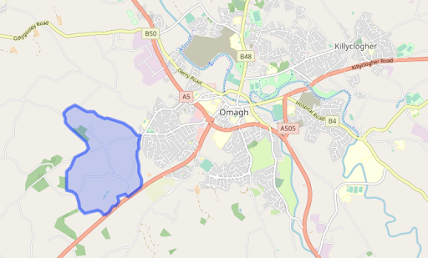 The Land was put up for sale through the recently established Encumbered estates court.

Establishment of the Land Courts

By the mid-19th Century many of the large Irish estates in Ireland were in serious financial difficulty. Land owners found themselves legally obliged to pay out annuities and charges on their land, mainly to pay mortgages or ‘portions’ to family members contracted by marriage settlements and/or wills of previous generations. All of these payments had to be met, before the owner/ occupier could take an income from their estate.

By the time of the Famine, as prices for sale or rental of land plummeted, the monies that had to be paid out from the individual estates remained the same, and many Irish estates became insolvent as debts exceeded earnings. However, the landowners could not sell their estates to discharge their debts, because the land was entailed. In 1848 and 1849, two Encumbered Estates Acts were passed to facilitate sale of these estates. Under the second act, (12 & 13 Vict., c. 77), an Encumbered Estates Court was established, whereby the state took ownership of these properties and then sold them on with a parliamentary title, free from the threat of contested ownership.

In 1852, it was replaced by the Landed Estates Courts, which was itself superseded in 1877 by the Land Judges Court, part of the Chancery Division of the High Court. Although there were some differences in the powers of these courts, their principal function remained the same, to sell off insolvent estates.

The Land Courts system was the first significant step towards the break-up of the old estates in Ireland. From the genealogist’s perspective, the Rentals have an added value, because the estate records (rentals, maps, leases) that would have existed prior to these sales, no longer survive. This is because once the parliamentary grant to title was secured by purchase from the Land Courts, there was no need to retain any of the documentation regarding previous land title.

The Rentals are effectively printed sale-catalogues, which were circulated to prospective purchasers in advance of the sale. They were compiled with the intention of attracting purchasers and of providing information on the estate in a clear and uniform manner. The Land Courts sold estates in every county in Ireland, and the Rentals as a whole cover large parts of the country. The estates now sold included urban as well as rural property, and many of the Rentals relate to houses and other buildings in villages, towns and cities. The information is printed and presented in a standard manner.

The Landed Estates Court “Rentals” are an important source for Irish family history, as they provide extensive information about land occupation in the mid-nineteenth century, often including information back to the 18th century. They were printed to facilitate the sale of bankrupt estates and include information about tenants, the lots they rented, the terms of their tenancy, as well as a map specifying the boundaries. More than 500,000 tenants are recorded in these documents dealing with more than 8,000 estates throughout the country.

The Burgoyne tenants in Ballygowan were only tenants from year to year and had less security than those tenants who held terminable leases or perpetuity leases: