Roy Orbison and his Lurgan roots

In the spring of 1968 Roy Orbison (the Big O) sang at the Regal cinema in Lurgan. 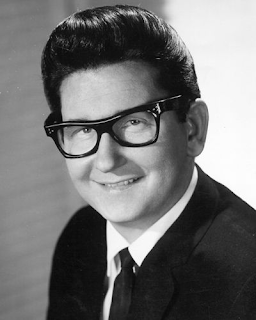 Orbison was probably not aware that he may have been performing in his ancestral home, the place of  his roots in Lurgan, Co Armagh. Orbison (Orbinson) is a rare name in Ulster associated with the parishes of Shankill (Lurgan) and Donaghcloney the latter in Down and the former in Armagh, but both are very close to the town of Lurgan.

Roy Orbison's putative ancestor, 'Thomas Orbison was born near Lurgan, Ireland about 1715, emigrated to America about 1740 and purchased a farm near Welsh Run now Franklin Co (then in Peter's township, Cumberland Co), Pennsylvania, where he resided until his death March 1779' (Source - Commemorative biographical encylcopedia of the Juniata Valley: comprising the counties of Huntingdon, Mifflin, Juniata and Perry, Pennsylvania, containing sketches of prominent and representative citizens and many of the early settlers; volume 1, 1897 Chambersburg, P.A. pub by J.M. Runk & Co.).

Some of the American family claim that this Thomas Orbison is the original patriarch of Roy Orbison's family (but I am unable to verify this). If true, this would mean that Roy Orbison's family roots lay in the town of Lurgan. There was only one household in Lurgan in the 1901 census - headed by a Samuel Orbinson aged 32 but his origins lay in county Down.

A family by the name of Orbinson were in the 1901 and 1911 census returns for Tullyheron (Waringstown), Donaghcloney, Co Down. Orbison and Orbinson are interchangeable spellings of the same surname. We are fortunate that the Donaghcloney Church of Ireland registers of births, marriages and burials are intact from 1697 there it was possible to trace a line of descent for the Orbison family of Tullyheron (from John Orbison c.1791-1869) by his wife Ellen (c1787-1853).

Family tree of John & Ellen Orbison of Tullyheron - as follows - 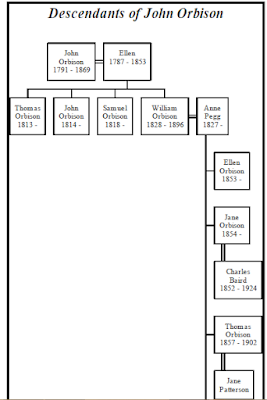 I could not locate the baptisms of John Orbison (c1791-1869) of Tullyherron but it is probable that he was the son of the John and Ann Orbison who had children baptised in Donaghcloney parish church in the period 1786 to1790. The latter John Orbison was a linen weaver who rented his farm in Tullyheron in 1796 from John Waring - the lease reads as follows:

A lease dated 1 May 1796 between John Waring (Daltry Lodge), Esq to John Orbison near Waringstown a linen-weaver for the life of Josehua Cibborn or 41 years for 6 acres of the sessagh of Tullyherrin, Co Down annual rent £9-2sh (T1023/132).

The earliest recorded Orbison in the register was one William Orbison who had a child Jane baptised in Donaghcloney in 1751. He may well have been the original patriarch of the family. It seems likley that the said William Orbison was born circa 1720 given that his daughter Jane was baptised 1751. This would make him a contemporary of Thomas Orbison the emigrant born 'near Lurgan' 1715.

It seems likely given the rarity of the name and the fact it is concentrated in a small area between Lurgan and Donaghcloney that all Orbisons would be related and perhaps descended from one common ancestor. Unable to find the name in any record for the town of Lurgan in the pre-1800 period, I turned to Registry of Deeds (an unbroken archive from 1708) and struck lucky in a deed that was registered 1717.

Here we have concrete proof of one John Orbison residing in the town of Lurgan 1717 and most likely the father Thomas Orbison the emigrant since he was born 1715 near Lurgan. It is possible that William Orbison listed in the registers for Donaghcloney was another son.

Mordecai Barrow (c1678-1729) was a linen dealer who resided in Lurgan and was one of the many merchants of Quaker background who resided in the town at the turn of the end of the seventeenth century (Quaker records for Lurgan contain a lot of information on the Barrow family who had their origins in Great Sankey, Lancashire, England). There is no indication that the Orbison family were Quakers as they do not appear in the Quaker records in Lurgan.

This information adds a little further detail that John Orbison's wife was named Jane. In this we have reached the limits of our research but have confirmed the existence of the Orbison family in Lurgan, Co Armagh from 1717.

If it can be proven that Roy Orbison (1936-1988) was a lineal descendant of Thomas Orbison (c1715-1779) the emigrant to Pennsylvania then the town of Lurgan can quite rightly claim him as a son of their own. In addition, we now know that John Orbison residing in Lurgan in 1717 is most likely the progenitor of the Orbisons of Lurgan, Waringstown and Donaghcloney.