The early history of Artikelly village near Limavady

Artikelly is a small village and townland one kilometer north-east of Limavady, which in the census of 2011 had a population of 360 people. The Haberdashers' company of London was granted this area in the plantation scheme but soon farmed out the land to the highest bidder Sir Robert McClelland of Bombay, Kirkcudbrightshire, Scotland and his main headquarters was located at Ballycastle (Aghanloo) but also a settlement was built at Artikelly. The village has quite an interesting history and was once a settlement of some prominence in the Roe valley in the seventeenth century.

The Haberdashers' had their centre in the northern section of their estate where a castle was built at Ballycastle on a natural bank on what was Campbells farm (in 1983). The Haberdashers' built a linear village at Artikelly, one mile from the castle consisting of one street with two rows of thatched single-story cottages set in rectangular plots. William Babington opened an inn in Artikelly (before 1616) - he was one of the earliest tenants on the Haberdashers' estate paying an annual rent of £1-10sh but was described as 'dead' in the rent roll of 1616 (T520/1). This was the earliest known pub in the Roe Valley! A contemporary of Babington was Robert Burnes of Artikellie whose will was probated in 1628.

We know the names of some of the early plantation families in the village (before the 1641 rebellion) -the summonister (court) records (Tension Groves' M.s T808) mention a number of settlers in Artikelly (mostly spelt Ardkillen in the old documents). John Rosse was fined for non-attendance in 1617,  and in 1626 James McClellan, Gent was fined for assaulting John Armstrong. Alexander White of Ardkillen was mentioned in 1628, Robert McClellan in 1630 and Jane Stewart, spinster in 1637.

The most prominent early family in Artikelly was a family by the name of Hillhouse - I have a short history of the family linked below in PDF format.

The Great parchment Book of 1639 refers to the 'six townes' of Artikelly (they are the townlands of Artikelly, Clooney, Gortnamore, Grannagh, Magheraskeagh & Tullyarmon) and that a weekly market was to be held in the town of Artikilley 'upon a Wednesday' and a number of fairs to be held annually on specific dates. The account book of James Bouy, an agent of Phillips' Limavady estate mentions that 'Neil Pasely (was) due for ye fairs, Ardekelly' in 1684 (T2825). On 17 Aug 1639 a lease was granted to William O'Halley of Artikelly of one messuage or tenement with garden as well as a farm of some 19 acres Irish plantation measure, 'now or late in possession of Henry Kelso'.

In 1641, the outbreak of rebellion by the local Irish scattered the plantation families - many took refuge in McClelland's castle at Ballycastle. In the aftermath of the rebellion there were depositions taken at Newtownlimavady in 1656 from local people who survived including Abraham Hillous of Artikelly and James McClellane alias Howell of Ardikelly gent aged 70 years or thereabouts.

The disruption caused by war lasted throughout the decade of the 1640s - new leases were given out. On the 29 Oct 1646 Robert Maxwell (from the safety of Orchardtown in Scotland) granted a new lease to Robert Hunter of land formerly possessed By Gorge Hunter of lands in Artikelly (T640/54).

The Haberdashers' estate became disputed territory in the aftermath of the death of Sir Robert McClelland but his son in law Robert Maxwell was in possession of the six towns of Artikelly in the seventeenth century and one Richard Murray is mentioned in Artikelli in a rent roll c.1650 (T640/54).

The Haberdashers' estate was eventually take over and farmed by the Beresford family - a map from 1717 shows the linear village of Artikelly with 40 houses either side of the main road to Newtownlimavady (courtesy of the National Library of Ireland). 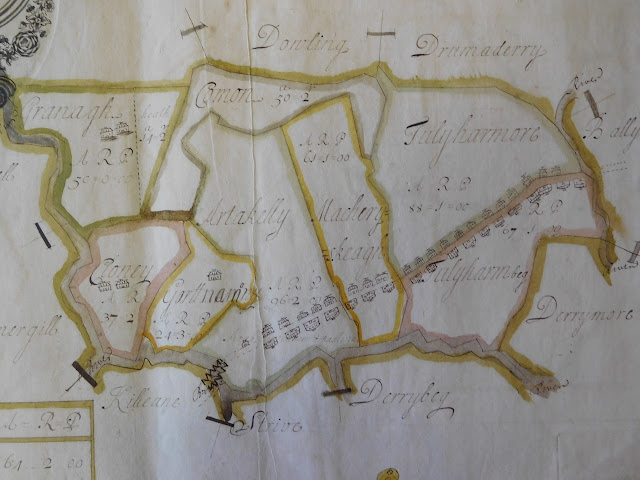 One notices a bridge in the map - it could be the present Artikelly bridge (or an earlier forerunner) described as 'pre-1831, a nice hump-back bridge of two arches with salient angled buttresses' (Ulster Architectural Heritage Society).

The family of Forsyth was also a prominent family in Artikelly - Jacob Forsyth (will 1763) had a son William who married Barbara Patton of Myroe (her sister Nancy married Rev John Tennent). From Jacob are descended Lord Moran (Doctor of William Churchill) and Dame Dehra Parker (TH Mullin, Limavady & the Roe Valley page 121).

Dances were also held at Artikelly in the 19th century and is mentioned in the Ordnance Survey Memoirs of the 1830's. The memoirs tell us that, 'the most remarkable person born in (Aghanloo) parish was the father of George Berriman, who is said to have had 49 children. He had double fingers and double toes on each hand and foot and had 49 children, twins at each birth, by different women, was in the capacity of a herd in the townland of Ballyhanna.  In 1818, his son, George Berriman, A Protestant bachelor about 20 years old was murdered at a dance in a barn in Artikelly.

A William Watson who died in Artikelly in 1855 aged 82 years (c.1773-1855) was described as a descendant of Thomas Benbow an early settler at Limavady and near relation of Admiral Benbow. (LD Sentinel 1 Feb 1855). Watson's mother was a Cromie from Artikelly and his maternal grandmother was a Benbow. His grandfather Marcus or Mark Cromey was listed in the 1740 protestant householders' survey in Artikelly.

NAMES OF PRE-1850 FAMILIES ARTIKELLY (from will indexes)